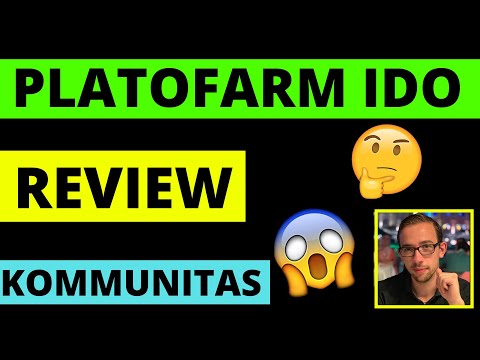 Are YOU planning on joining the upcoming PlatoFarm #IDO on Kommunitas? In this video, Colin does a full review of this upcoming #CryptoGaming project.

Plato Farm is a metaverse that uses blockchain technology to simulate the evolution of human civilization. Through hard work, players can develop the wildland into a rich and modern home of human civilization, and then create the space civilization. In 390 BC, the great ancient Greek philosopher Plato dreamed of a kingdom of fairness, justice, order, perfection, division of labor, and happiness. Let us work together and build this dreamland together!

Plato Farm project was developed by Second Space Studio and launched in 2018. The core members of the project have developed and operated a wide range of large-scale online games and come from world-renowned game teams and blockchain developers such as Jurassic World Evolution, Frostpunk and Farm Together.

Plato Farm has achieved great success in the North American market, which attracts two million users and over 200,000 DAUs. The game combines the underlying contract technology architecture of the blockchain with completely embedded in-game users who can thrive in its scientific trading system by making money while playing.

We believe that the ideal world described by the metaverse will eventually come. Games will be integrated with the blockchain economy, while gameplay will be one way to obtain economic benefits. We are committed to creating a highly playable and enjoyable game in which players can expand their farms, collect game items and earn money. Games like Plato Farm can utilize AR smart wearable devices to provide users with a multi-dimensional Second Space that empowers them with a virtual social identity unattainable in real life. Players can organize decentralized economic and social activities and work together to create an ideal world from the unlimited depths of their imaginations.

3. Registration
The game support creating the game account by importing a private key or players can also create wallets (set passwords, backup mnemonics) directly on the login interface according to the prompts and complete account registration.

Farm System Players’ achievements are all reflected in the farm system. Farming and breeding are carried out through the farm. Players can purchase production resources and land in their wallets, and earn corresponding rewards through work in the game.
For example, at the beginning of the game, the player uses PLATO to buy a planting field, sows the wheat seedlings purchased with MARK on the planting field, waits 30minutes for the wheat to be mature, then harvests it to obtain wheat, and then sells the wheat for MARK which can then be freely traded on the secondary market.
This is one of the gameplay methods and the main interaction method of the farm system. There are rare NFT resources and general items on the farm.
Some rare items include land, special crops, special tools, special fruit trees, special animals, and processing workshops. All need to be unlocked through PLATO tokens. These rare NFT items will be continuously introduced as the game progresses.

DISCLAIMER: Please be advised that I am not a professional advisor in business areas involving finance, cryptocurrency, taxation, securities and commodities trading, or the practice of law. The information and content written, broadcasted, and/or disseminated by and through “Colin Dijs, Colin Digits, ItsDigits” is intended FOR GENERAL INFORMATION PURPOSES ONLY. Nothing written or discussed is intended to be construed, or relied upon, as investment, financial, legal, regulatory, accounting, tax or similar advice, nor should it be. All content expressed, created, and conveyed by “Colin Dijs, Colin Digits, ItsDigits” is premised upon subjective opinions pertaining to currently-existing facts readily available.