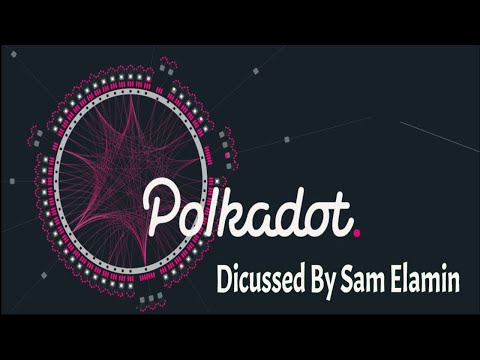 On This Episode of the T Ray Show special guest Sam Elamin Dicusses Polkadot blockchain. Sam Talks about why he chose Polkadot over other blockchain. They talk about the pros and con of building Polkadot Blockchain. It is much more that a buzz word

Polkadot is an open source, blockchain platform and cryptocurrency. It provides interconnectivity and interoperability between blockchains, by enabling independent chains to securely exchange messages and perform transactions with each other without trusted third-party. This allows for cross-chain transfers of data or assets, between different blockchains, and for cross-chain DApps (decentralized applications) to be built using the Polkadot Network.

The Polkadot network has a primary blockchain named relay chain and many user-created parallel chains called parachains. The relay chain acts as the governance layer of the network, while parachains are auctioned, enabling independent projects to create and operate their own blockchains that live within the Polkadot infrastructure and benefit from its security.

The protocol was created by the Ethereum co-founder Gavin Wood, and raised over $144.3 million in its Initial coin offering in October 2017.

The network uses a proof of stake consensus algorithm. The protocol used, Blind Assignment for Blockchain Extension (BABE), is derived from Ouroboros. The protocol was adapted by the Ethereum co-founder Gavin Wood and is developed by the Web3 Foundation with the initial implementation by Parity Technologies.

The Polkadot protocol is intended to be a scalable multi-chain technology. Unlike the usual blockchain implementations, centered around a single blockchain and having various degrees of generalization depending on the applications, Polkadot provides a primary chain (relay-chain), which can host a large number of validatable and globally consistent data structures (parachains).

Polkadot is considered “scalable” by design. A project deployed on Polkadot can be substantially distributed and parallelized over a large number of parachains. Knowing that all aspects of each parachain can be conducted in parallel by different parts of the network, the system is thus considered scalable and extensible on a large scale. Polkadot is intended to provide the basic elements of an infrastructure, leaving any application-related complexity to the middleware level.

Polkadot was created to connect private/consortium channels, public/permissionless networks, oracles and any other technology in the Web3 ecosystem not yet developed. Through Polkadot’s relay-chain, which focuses on scalability, governance and interoperability, the protocol provides access to an internet of independent blockchains that can exchange information and perform transactions without a trusted third party.

In general, Polkadot seeks to solve the following problems:

Interoperability: Polkadot is designed to enable applications and smart contracts on one blockchain to seamlessly transact with data and assets on other chains.
Scalability: Polkadot gives the ability to run several parachains*, each processing multiple transactions in parallel, which allows networks to obtain infinite scalability.
Shared Security: With Polkadot, security is pooled within the network, which means that individual chains can leverage collective security without having to start from scratch to gain traction and trust.

For more videos watch this playlist: