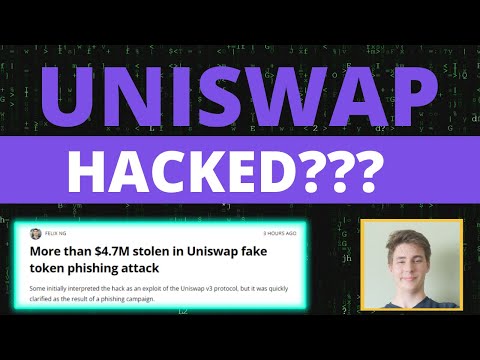 Will the uniswap hack impact you? In this video, Rik will look at the Uniswap hack and more crypto news of the day..

What is Digits Club?

Digits Club is an exclusive NFT membership that grants you access to a private community, exclusive community videos, early access to partner projects and much more!

A sophisticated phishing campaign targeting liquidity providers (LPs) of the Uniswap v3 protocol has seen attackers make off with at least $4.7 million worth of Ethereum (ETH). However, the community is reporting the losses could be even greater.

Metamask security researcher Harry Denley was one of the first to raise the alarm bells of the attack, telling his 13,000 Twitter followers on July 11 that 73,399 addresses had been sent malicious ERC-20 tokens to steal their assets.

At least $4.7 million in ETH has been lost in the attack, according to a Twitter post from Binance CEO Changpeng “CZ” Zhao. However, there are also reports amongst the crypto community that there may be more significant losses from the incursion.

Prominent crypto Twitter user 0xSisyphus noted on July 11 that a “large LP” with around 16,140 ETH, worth $17.5 million, may have also been phished.

According to Denley, the phishing attack works by sending unsuspecting users a “malicious token” called “UniswapLP” — made to appear as coming from the legitimate “Uniswap V3: Positions NFT” contract by manipulating the “From” field in the blockchain transaction explorer.

Users curious about their new tokens would be directed to a website purporting to allow them to swap their new tokens for Uniswap’s native token UNI, worth $5.34 each at the time of writing.

The website would instead send the users’ address and browser client info to the attackers’ command center, which would also attempt to drain cryptocurrency from their wallets.

DISCLAIMER: Please be advised that we are not professional advisors in business areas involving finance, cryptocurrency, taxation, securities and commodities trading, or the practice of law. The information and content written, broadcasted, and/or disseminated by and through “Colin Dijs, Colin Digits, ItsDigits, Digits Club” is intended FOR GENERAL INFORMATION PURPOSES ONLY. Nothing written or discussed is intended to be construed, or relied upon, as investment, financial, legal, regulatory, accounting, tax or similar advice, nor should it be. All content expressed, created, and conveyed by “Colin Dijs, Colin Digits, ItsDigits, Digits Club” is premised upon subjective opinions pertaining to currently-existing facts readily available.