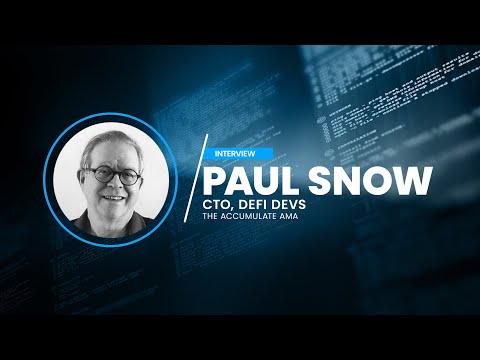 The #AccumulateAMA series with questions answered by Paul Snow, Chief Technology Officer at DeFi Devs, a community developer of Accumulate.

Paul Snow joined DeFi Devs in June 2021 as CTO and Chief Blockchain Scientist. Mr. Snow brings over 20 years of experience in system configuration technology and is an expert in building novel and powerful systems to solve data-centric problems in computer science.

Before joining DeFi Devs, Mr. Snow founded Factom in 2014, a data integrity blockchain protocol designed to provide easy integration into legacy systems without the need to handle cryptocurrency. With a focus on applications in digital identity, supply chains, and loan origination, Factom’s design allowed millions of documents to be secured by the Bitcoin Blockchain, allowing a landmark ruling by China’s supreme court that blockchain can be used as evidence in Chinese courts.

A true open-source evangelist, Mr. Snow founded a meetup group for Bitcoin and cryptocurrency in 2013 (which he continues to host), chaired the Texas Bitcoin Conference in Austin from 2014 to 2018, contributed designs for the Colored Coins projects, as well as to the design of the Ethereum virtual machine, and has advised many crypto projects and companies. Mr. Snow has multiple patents to his credit including graphics hardware, system configuration technologies, and more than seven blockchain patents.

You Were Elected a Director at Factom, Can You Tell Us What That Means? – The Accumulate AMA

Do You Have a Message to the Factom & Accumulate Community? – The Accumulate AMA